Where to find Muffaletta’s Around Orlando including Jason’s Deli, Tibby’s New Orleans Kitchen, and Pat O’Briens 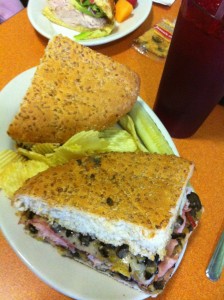 A Muffaletta is a popular sandwich that originated and is most famous in New Orleans, Louisiana. Also spelled sometimes as muffuletta, the muffuletta is a type of sandwich with round Sicilian sesame bread and is known to be rather large where most restaurants will offer a quarter or half muffaletta to enjoy. The ingredients start with familiar ingredients of ham, hard salami, and melted provolone cheese, but then an olive salad is added on top to give it a very different taste than your traditional hoagie or po boy.

Jason’s Deli is the most popular restaurant to get a muffaletta in Orlando with their muffaletta sandwich even getting it’s own segment on a Food Network show (see video below). With three area locations, I tried the muffaletta at the SODO location in Delaney Park. I can say that all of the ingredients of the sandwich were very fresh and with large portions. The olive salad portion of the sandwich is made up of both black and green olives. I think if I was an olive-type person, I would had loved the sandwich but unfortunately my palette doesn’t agree with such a heavy amount of olives on a sandwich so I will probably stick with their reuben going forward. Stating that, if you do love olives in general, you will probably enjoy this New Orleans classic.

Other restaurants with Muffaletta’s around Orlando include the New Orleans-themed Tibby’s New Orleans Kitchen in Winter Park, from the same founder as Tijuana Flats, and Pat O’Briens at Universal Citywalk (see map below).