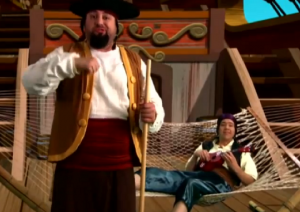 The Never Land Pirate Band from the Disney Junior cartoon Jake and the Neverland Pirates will be at Downtown Disney beginning on Friday, August 3, 2012 through Sunday, August 12, 2012 to sing some of their favorite children’s songs.

The Never Land Pirate Band has stolen the show on Disney’s new animated series called Jake and the Neverland Pirates with some catchy tunes and choruses like “Yo, Ho, Ho” and “Talk Like a Pirate”. The Jake character from the show will join Sharky and Bones for live musical performances at 2pm, 3pm, and 5pm on each day.

Some of the songs to be performed include “Roll up the Map”, “Castaway on Pirate Island”, and “Talk Like a Pirate”. The shows will take place at the Downtown Disney amphitheater.

Update: August 7th, 2012:  Check out the full concert from the August 4th performance at Downtown Disney:

This entry was posted in Attractions. Bookmark the permalink.