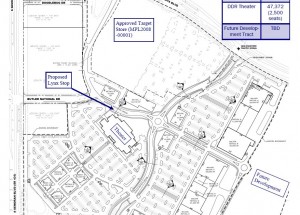 A new movie theater is being planned to open along with a new Super Target just outside the Orlando International Airport property in the Lee Vista section of Orlando. According to this Orlando Business Journal story, the developer will break ground in 2012 with a completion date of 2013.

According to the application to the Municipal Planning Board, the new Lee Vista town center will feature six full-service restaurants that will strongly encourage outside seating with a short walkway to the entrance of the theater. The restaurants will be setup to allow for views of arriving planes arriving to Orlando International Airport. The total size of the new development will include 510,800 square feet of new retail development (including the Super Target). It will be adjacent to already developed properties that include a Cracker Barrel, Starbucks, Wendy’s, Chipotle, and Cold Stone Creamery, among others.

The new shopping center and restaurants will join already a strong stable of chain-restaurants in the area including Bonefish Grill, Longhorn Steakhouse, Tony Roma’s, Chili’s, TGI Fridays, Miller’s Ale House, Hooters, Denny’s, and Sony’s BBQ along with many other smaller restaurants.

Update (April 27th, 2012) – The Orlando Business Journal is reporting that Panera Bread will be opening a drive-through location on Semoran Boulevard and Lee Vista where a Chick-Fil-A and Wawa are also opening.

The new shopping center is following the new Orlando Gateway Project underway in the area and another new small shopping center going in caddy-corner to the project on Semoran called Lee Vista Westside that plans on adding an additional 4 restaurants to the area.

Click Here to view the Municipal Planning Document for more information and renderings of the shopping, dining, and entertainment center.

What is your take on the new project and what restaurants would you like to see come to the new center? Add your comments below.

This entry was posted in News and tagged airport, orlando. Bookmark the permalink.