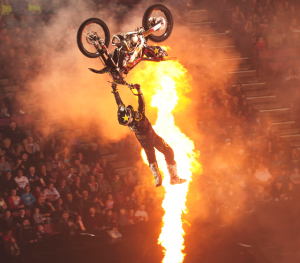 From the producers of such events as the Advance Auto Parts Monster Jam, Disney On Ice, and Ringling Bros. and Barnum & Bailey Circus comes a new show to Orlando in 2014 that features extreme choreographed freestyle motocross action and martial arts called Nuclear Cowboyz that will be making a stop at the Amway Center in Downtown Orlando on the weekend of March 8th and 9th, 2014.

The production and story line of the Nuclear Cowboyz show features the saga of an allied tribe, the Nuclear Cowboyz, whose sole commitment is to defeat an indestructible evil tyrant and her army in this action-infused freestyle performance of pure danger and raw combat.

The show features over 1,000 motocross freestyle tricks with laser effects, pyrotechnics, and a soundtrack mix of heavy metal, dubstep and alternative hip hop. The Shaolin Kung Fu Warriors use their martial arts to bend metal rods, break objects in precise strikes and be lifted in the air on the points of handheld spears.

Consumers can save $5 per ticket and select the very best seats before tickets go on sale to the general public from July 22nd-25th, 2013 by visiting Ticketmaster and using the special pass code: NC2014.