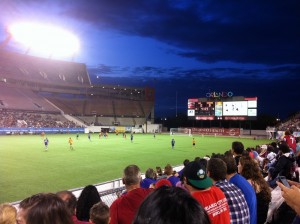 Attending an Orlando City soccer game is the perfect remedy after following and cheering for an overpaid basketball player that was offered over a hundred million dollars to play in our city and we were then told where we could shove that money.

Orlando City Soccer Club consists of a team of professional soccer players that are playing the game that they love in front of a family-friendly crowd cheering them on. Attending the game had me reminiscing of the days when I used to watch UCF Football games in the Citrus Bowl before they were in Division I and you would have 8 or 9 thousand dedicated fans cheering on the hometown team. The sport of soccer under the lights along with the fans has you feeling that you are attending an international sporting event. It’s just like Fifa Soccer on the Xbox.

All in all, the soccer game I attended was a great time and tickets from scalpers could be had in the single digits. Here are some tips when attending the games:

In 2016, we will update this article as the Orlando City Soccer Club will begin their second season in the Major League Soccer League in their new stadium in Downtown Orlando.