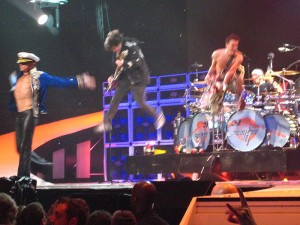 With Spring Break in full effect, below is our best picks for some of the best concerts scheduled to come to Orlando in April 2012 that features two of the biggest performers from the 1980’s.

Keeping with the 1980’s legends, on Thursday, April 12th, Van Halen will play the Amway Center while Daughtry plays the Hard Rock Live.

From Thursday, April 19th through Saturday, April 21st, the Florida Music Festival will take place around Orlando at multiple venues featuring over 150 bands.

Click Here to view the entire concert schedule for all months as covered from Orlando Local Guide.

Daughtry at Universal Studios Orlando in 2007