Here at Orlando Local Guide, we have been inspired from some of the recent charity givings happening around the city. The First Baptist Church of Orlando recently raised $5.6 million dollars for the homeless living in the city of Orlando.

Orlando Local Guide currently has 31 Facebook fans. For every additional facebook fan that Orlando Local Guide receives from now until March 27, 2011 (the same end date of the Arnold Palmer Invitational), we will donate $1 to the Winnie Palmer Hospital for Women and Babies, up to $100 (ie. 51 fans – $20 donation; 150 fans – $100 donation).

Click Here to make a donation to Winnie Palmer Hospital for Women and Babies.

If Orlando Local Guide reaches 1,000 fans or more by the end of March 27, 2011, we will make an additional gift to Winnie Palmer Hospital for Women and Babies. A screen print of the donation will be posted to this page in April 2011.

Update, March 28, 2011 – At the end of the day, March 27, 2011, Orlando Local Guide now has 49 facebook fans. We will be making a donation of $18 to Winnie Palmer Hospital in the next several days and uploading the screen shot to this post. I would personally like to thank everyone that added us to their facebook fan page over the last several days. We hope to do similar fundraising opportunities in the future to give back to the Orlando community. 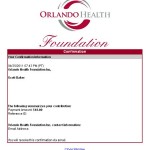 This entry was posted in News and tagged fundraiser. Bookmark the permalink.