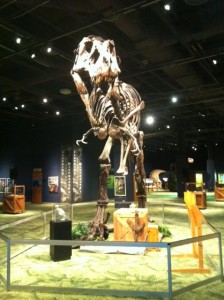 In a world where technology is changing and transforming by the day and Orlando’s world class theme parks are in constant reinvention mode, Orlando Local Guide looks to find where a Science Museum fits into the fabric within the city of Orlando. This is Orlando Local Guide’s Orlando Science Center Travel Guide and Review.

The Orlando Science Center is located a few miles Northeast of Downtown Orlando just on the edge of the city of Winter Park. The museum is organized into four floors that range from dinosaur exhibits, giant simulation video games, health and body, nature, and touring exhibits.

We begin our review with the Dr Phillips CineDome within the Orlando Science Center. This is where the center has made it’s biggest investment and it shows. The Cinedome is an 8 story movie screen wonder that we have named the best individual attraction outside of an Orlando theme park that shows several movies throughout the day from nature, surfing, and Orlando at night. The CineDome is worth the trip to the Science Center alone.

Science Live is the term given for the interactive programs that are scheduled each day that distinguishes the space as a Science Center as opposed to a Science Museum. On the first floor of the science center are baby alligators and turtles on display where daily feedings are put on throughout the day. In the same space is a sting ray tank that also has daily feedings to watch where you can see the sting rays mouths up against the glass as they take in their bait.

On Saturday and Sundays, the Science Center puts on a science show that showcases all of the tricks that you always wanted to do in your science lab. From pouring liquid nitrogen on jackets and clothing to setting off pyrotechnics and lighting things on fire, the science live program is a little bit museum, a little bit showmanship.

On certain days, the Crosby Observatory is open for guests to look up into the sky to view the planets, the four moons of Jupiter, the rings of Saturn and deep sky objects such as galaxies, nebulas and double stars.

The museum exhibits are where we expected to find some dated exhibits and we were not disappointed. We can expect that a lot of science teachers can bring their students to the science center on field trips throughout the year to study the different parts of the body and to play with electricity but a lot of the attractions were not holding the attraction of the kids on our visit.With that, there were some notable exhibits that we saw:

The Severe Weather Station Exhibit is an old but still modern WFTV-ABC Channel 9 studio that has been setup with a green screen as a permanent exhibit that lets you and your children pretend to do the weather on television after picking the type of forecast that you want to select and then watching it back on the big screen.

In the same area as the meteorologist exhibit is a small room where kids can feel what it is like to be standing inside of a hurricane in the hurricane simulator with winds greater than 100 miles per hour. Also, right next to the simulator is another simulator to view how a tornado gets started and circles around.

To conclude, the Orlando Science Center makes for a great family day and can take up a full day to experience. We recommend that you get to the Orlando Science Center early and stick with the interactive shows of gator and sting ray feedings, Science Live shows, and CineDome movies. In between these sets, take some time to look around the different exhibits mentioned above and the Dinosaur exhibit within the museum.

If you are visiting Orlando and are considering the Orlando Science Center as an entertainment option, it is definitely one of the most affordable attractions available with admission prices at $12 for children and $17 for adults, especially when comparing the Science Center to some of the other smaller attractions at Downtown Disney and International Drive. The CineDome experience is worth the price of admission alone.