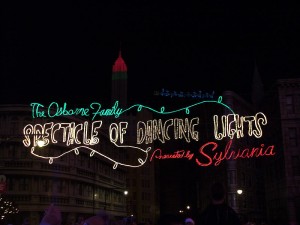 The Osborne Family Spectacle of Dancing Lights no longer occurs at Hollywood Studios. This was our article for when it was an annual event in Orlando:

Over 5 million LED Christmas lights dance to popular Christmas songs that appear to be a part of a radio station broadcast to give a classic traditional feel. The lights can be turned on and off on a dime and frequently do so during the Christmas shows that start up about every 10 minutes. Between sets, the Christmas lights stay on for photo opportunities and to keep the crowd moving. Every year the event has a new feature, and for the third year in a row there will be a meet and greet area where you had a chance to meet Santa Goofy with Goofy dressed up in a Santa Claus outfit that you can read about here.

Originally brought over to Disney from the Osborne family of Little Rock, Arkansas, for which the event is named, the lights were a mainstay on Disney’s back-lot residential street from 1995 to 2003 when the street was demolished. After a one year hiatus, the lights returned to Hollywood Studio’s Streets of America in a much different way in 2005.

Whereas the residential street edition of the lights looked a lot like Clark Griswold’s house in National Lampoon’s Christmas Vacation with no choreography, the Streets of America edition looks completely different where visitors are completely immersed into dancing lights that are controlled by over 1,500 dimmer relay circuits and control switches. A touch of snow on the streets adds to the experience. This was a definite upgrade on Disney’s part.


The Osborne Spectacle of Lights is at the Studio for a limited time each year from early November through the beginning of January. The 2014 event starts on Friday, November 7, 2014 and continues until Sunday, January 4, 2015. The lights are turned on around dusk (est. 6:15 pm) and stay on until park closing. There are several times throughout each show that the lights are completely turned on and off so there is no need to be there when the lights are first turned on. This is one of the premier events to attend during the Christmas season and is highly recommended. Make sure you go on a night that Fantasmic is playing if this is your only day to visit the studios.

Click Here for move information about the Osborne Spectacle of Lights.

Click Here for more information about the history of the event and the Osborne Family’s involvement.