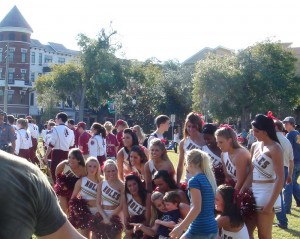 One of the better free events to do around Orlando between Christmas Day and New Years Eve is the Russell Athletic Bowl Parade of Bands in Winter Park along Park Avenue.

The Russell Athletic Bowl is the first of Orlando’s two bowl games to be played during Orlando’s Bowl Week with the 2015 game being played on December 29th, 2015 at 5:30 pm. Earlier on in the day in the city of Winter Park, from 11 AM until 1 PM, the marching bands and the cheerleaders of the two teams participating in the Russell Athletic Bowl will march down Park Avenue and then do a “Battle of the Bands” type display in Central Park going through their repertoire of songs. Visitors to Winter Park from the participating  teams will be pleasantly surprised with the setting of shops and restaurants available to visit both prior-to and after the parade.

The 2015 event participants this year are the North Carolina Tar Heels of the ACC and the Baylor Bears of  the Big 12. Be sure to be on the street at 11 AM sharp as the parade consists of only the two bands and cheerleaders so it is a very short parade.

The larger Florida Citrus Parade in Downtown Orlando is on Wednesday, December 30th, 2015 at 11 AM.

Click Here to read our official guide of the best holiday events going on in Winter Park and Baldwin Park during the Christmas and New Years season and click here for great Christmas events and things to do all around the Orlando area including the attractions.