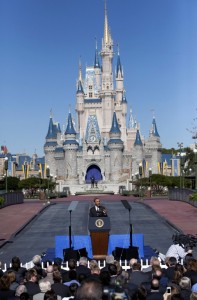 President Barack Obama is going to Disney World on Thursday, January 19th, 2012 in an effort to unveil plans to help tourism to the United States as reported by the Orlando Sentinel. President Obama will present his proposed strategy standing in front of Cinderella Castle at the Magic Kingdom.

The visit will highlight efforts by the United States to make it easier for foreign visitors to come here and visit everything that our Country has to offer like Disney World.

Below is the video from President Obama’s visit.

Click Here to read the full story from the Orlando Sentinel and here for the photo gallery of his visit.