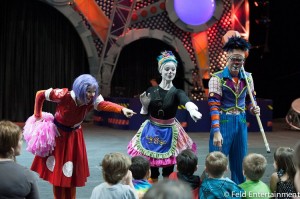 The circus is coming to Orlando at the Amway Center on Thursday, January 12th, 2017 and staying until Monday, January 16th, 2017. The Greatest Show on Earth brings wonder and fun with amazing animal acts that will astound the family.

High-wire wizards, powerful strongmen, BMX trick riders, trampoline daredevils, inconceivable contortionists, a high-flying human cannonball, a bungee aerial skydiving display and an international assembly of more than 300 cast and crew provide two and a half hours of thrilling entertainment will have children and adults on the edge of their seats. The 2017 event is entitled “CIRCUS XTREME” that will have tigers, acrobats and aerialists that are engineered into one spectacular performance.

In one of the circus acts, an all-female troupe of Mongolian riders will send arrows flying across the arena sky while performing a series of tricks and maneuvers atop elegant two-hump camels. Jaw-dropping freestyle BMX riders and free running tumblers fill the arena floor performing crazy-stunts mixed with acrobats leaping through a 15-foot transparent tower.

Tickets for Ringling Bros. and Barnum & Bailey® Presents CIRCUS XTREME start at $16. Save $5 on many of the seats through January 12th, 2017 for the show performances while they last by using the promotional code of 5CIRCUS. Offer valid on all shows EXCEPT Thursday at 7:30 p.m. (opening night), Saturday at 3:30 p.m. and Sunday at 1 p.m. Not valid on Front Row and Premium Seating, nor day of show.

Click here to visit the official site for the show for more information.

John Ringling, who was one of the founding 5 circus kings of the Ringling Brothers and Barnum & Bailey Circus, left a generous gift to the people of Florida. His gift, upon his death, was his estate complete with a mansion and art collection. It is now known as The John and Mable Ringling Museum of Art whose home is in Sarasota, Florida.