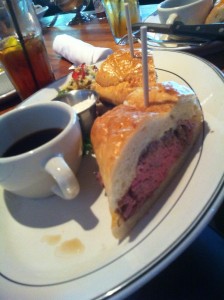 Growing up in Buffalo, NY until the age of 8, my family and I enjoyed a special type of roast beef sandwich that is local to western New York entitled the “Beef on Weck“. Anyone that has had a Beef on Weck will tell you that it is one of best roast beef sandwiches that one could consume. Noting that Beef on Weck’s are not available in the state of Florida, we provide you with the best alternatives that you can find in the Orlando area. This is Orlando Local Guide’s Best Roast Beef Sandwiches in Orlando.

Hillstone Restaurant in Winter Park, formerly Houston’s, is one of Orlando’s favorite sit-down restaurants that is best known for it’s prime rib. On their sandwich menu, Hillstone slices up their prime rib and puts it on a fresh bun with some horseradish sauce and au jus for dipping to provide the best French Dip Sandwich in Orlando (see picture above). This is an upscale premium roast beef sandwich that is a culinary treat for the senses.

Beefy King in the Milk District 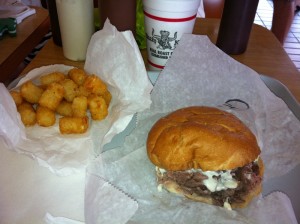 Whereas Hillstone’s French Dip is delicious to eat, it also runs around $18 with a side of fries or couscous (highly recommended). For a cheaper alternative that runs a lot closer to the New York counterparts mentioned above, head straight over to Orlando’s oldest independent fast food restaurant of Beefy King. Beefy King is an Orlando institution, first opening it’s doors in the Orlando area in 1968. Although Beefy King has the feel of a fast food restaurant, it’s roast beef sandwich trumps anything you will get at Arby’s and has great condiments of horseradish sauce and a couple of different barbecue sauces with one of them being a little spicy and tasty. What separates a Beefy King Roast Beef Sandwich from others is the steaming process applied to the roast beef just prior to it being served. Tater Tots take the place of french fries on the menu. Beefy King is located in the Milk District section of Orlando in Colonialtown (see map below).