Santa Claus Events around Orlando in 2015 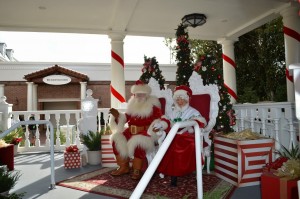 Mrs Claus also is known to make an appearance with Santa Claus and can be seen for photo opportunities at the American Pavilion at Epcot during the holidays (see photo above).

Santa Claus participates in multiple parades at the Magic Kingdom and Universal Studios Florida and is available to meet at Magic Kingdom, Downtown Disney, SeaWorld, and with Mrs. Claus at Epcot. Santa Claus is also available to meet at several area malls for photos and for children to ask him what they want for Christmas. Bass Pro Shops at Artegon Marketplace has several activities for children to do during the holidays.

This entry was posted in Family and tagged christmas, december, november, people. Bookmark the permalink.