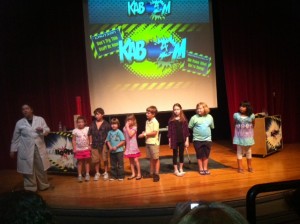 In the 1980’s, Nickelodeon had a popular show by the name of Mr. Wizard’s World that showcased Don Herbert, Mr Wizard, doing science experiments with children where there was usually at least one experiment that involved some type of pyrotechnics.

The KaBoom show, that is occasionally shown at the Orlando Science Center as part of their Science Live program, reminds us a lot of those Mr Wizard shows in the way that it is setup and it’s use of pyrotechnics and the science behind the explosions. The KaBoom show showcases the different uses of elements and matter that explode under different circumstances and shows colors and loud explosive noises. Check out the videos below for excerpts of some of the science experiments and explosions during KaBoom.

The show currently appears to be alternating with the Chill Factor show on Saturday and Sunday’s at 1:30 PM.

Click Here to see the current schedule of the Science Live Shows or call the Science Center at 407-514-2000 to see when the KaBoom show will be showing next.