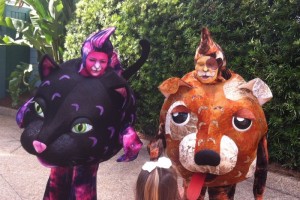 SeaWorld is the only major theme park in Orlando (not including Legoland) that has a trick-or-treating event for children as part of their general admission price during daytime hours on the weekends in the month of October.

With Halloween character greetings, kid parties, trick-or-treating, and special holiday shows, SeaWorld Halloween Spooktacular is a great event to extend out the Halloween time of the year for your kids and to get more use out of their costumes.

On the final two Saturdays and Sundays in September and every Saturday and Sunday in the month of October in 2018, SeaWorld celebrates Halloween from 12pm through 7pm with different characters dressed up in clever costumes that interact and play with the children also dressed up in costumes in-between trick-or-treating lines. Some of the characters that might be encountered are jellyfish, a hammer-head shark, starfish, and a catfish and dogfish (see picture above).

There are several different trick-or-treat stations for the 2018 event set throughout a section of the park that is used for their seasonal special events that stretches into the Shamu Happy Harbor kids area. Some of the candy we received when we attended where Twizzlers, Jelly Belly jelly beans, Sun-Maid Raisins, Air Heads Sour Belts, and Tootsie Rolls.

One of the highlights of the Spooktacular event is the special Halloween performance at one of the theaters staring Sesame Street characters Count Von Count, Elmo, and other friends.

Along the trick-or-treating route is a Halloween Dance Party with games and crafts that children can participate in (see video below).

Overall, the SeaWorld Spooktacular is a family-friendly event that is more of a reason to visit SeaWorld during Halloween time. As an annual pass holder in prior years, we had been very impressed with the different events that the park has had for it’s passholders throughout the year in which they have had preferred seating and perks for the different holiday events throughout the year.

It’s nice to have a family Halloween event that you can take the kids to that doesn’t cost extra like Mickey’s Halloween Party at the Magic Kingdom.

Click here to see our guide for spending Halloween in Orlando and here for more information about the Sesame Street Halloween show at SeaWorld.