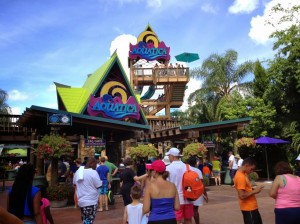 When thinking about multi-day resort theme park vacations in Orlando, Disney World and Universal Orlando may be the first parks that come to mind when planning a vacation but SeaWorld offers an enticing experience as well with the original SeaWorld Adventure Park, Discovery Cove boutique park, and Aquatica Water Park. With International Drive coming into it’s own as a major nightlife option in Orlando and special perks for staying at an official SeaWorld Parks hotel partner, a SeaWorld Parks multi-day vacation provides a great experience when visiting the Orlando area.

When planning your SeaWorld Parks multi-day vacation, you first need to look at purchasing your Discovery Cove boutique park ticket. These ticket prices seem high at first glance ranging from $259-$339 a day that includes swimming with a dolphin (or $169-$269 without swimming with a dolphin). However, what you will find when planning your multi-day vacation is that what you get for the price of a single-day ticket at Discovery Cove is well worth the price when you plan on visiting the other parks on SeaWorld property as well.

So lets take a closer look at what Discovery Cove provides during your time there. For the cost that is similar to a 4-hour dolphin excursion on a Caribbean Cruise, Discovery Cove provides you with the opportunity of an all-day experience of swimming with a dolphin, snorkeling with sting-rays and tropical fish, discovering a bird sanctuary, and relaxing on a lazy river and private beach. Also included is your breakfast and lunch, including alcoholic beverages, and all of your gear and locker rental.

If Discovery Cove has the ultimate lazy river attraction in Orlando, Aquatica has what we term a “crazy-river” attraction in it’s Roa’s Rapids attraction that is a lazy river on hyper-speed. Adults can opt to either wear a life-vest (or not) that both provide a slightly different experience. Without a life-fest you can find yourself fighting against the rapids of the river and with a life-vest you are pretty much at the mercy of the river’s rapids where you are forced by the current to keep moving and which the experience can provide you with the feelings of weightlessness at times.

Aquatica is Orlando’s newest water park and it shows with many of the slides being wider and more advanced than other water parks. The kids section has water splashing everywhere and the park also sports a large beach section with two distinct wave pools that are separated by a man-made reef.

The original marine park in Orlando featuring Shamu, Dolphin, and Sea-Lion shows, SeaWorld Adventure Park has added several signature rides over the last several years including the roller coasters Kraken and Manta, flume ride Atlantis, and most recently Turtle Trek 3D featuring Sea Turtles and the Antartica Penguin encounter dark ride. SeaWorld has many rides, shows, and activities to easily make it a multi-day park within itself.

During certain times of the year, SeaWorld Adventure Park provides a great nightlife experience with special marine-based nightime shows and fireworks. Outside of SeaWorld Adventure Park, nearby International Drive has turned into the defacto-nightime area for SeaWorld similar to Disney Springs(Downtown Disney) at Walt Disney World and Citywalk at Universal Studios Orlando.

The International Drive area north of the convention center and south of Sand Lake Road has grown up, so to say, over the last few years with fine dining restaurants including the Capital Grille and the Oceanaire Seafood Restaurant, entertainment options including the Orlando Improv Comedy Club, BB Kings Blues Club, Kings Bowl Bowling Alley, Ripley’s Believe it or Not Museum, Regal Movie Theaters, Congo River Mini-golf and nightclub spots including Senor Frogs and Howl at the Moon Piano Bar.

Similar to the hotels at Walt Disney World and Universal Studios that help make a multi-day visit to those parks more convenient, there are now several official hotel partners that SeaWorld is working with to help with transportation and accessibility to their parks along with several perks. If the Renaissance Orlando at SeaWorld hotel is considered a signature hotel of SeaWorld Parks, the Marriott Residence Inn and several other similar properties would be considered the moderate resorts of the property.

Hotel guests staying at these partner hotels receive additional perks to the SeaWorld Parks including free shuttle rides to the parks that run every 50 to 60 minutes, free Quick Queue access, a service that allows for front-of-the-line access for the most popular rides at SeaWorld Adventure Park, a Free Rescue Tour that provides a behind-the-scenes look at SeaWorld’s rescue and rehabilitation facilities (on select days). Also, at both SeaWorld Adventure park and Aquatica, guests receive early park entry on select days, 10% off dining, and 10% off merchandise sales with purchases of $50 or more. All of the hotels have a stop along the I-Ride Trolley that provides access to a majority of the attractions and outlet shopping along International Drive.

Throughout the year, SeaWorld typically has promotions for Florida Residents for both annual passes and admission to Discovery Cove.

Available now through December 2014, the all-inclusive day resort offer for the Discovery Cove Dolphin Swim Day Resort package for Florida Residents is $219 plus tax (or $149 a day without the dolphin swim). Also, instead of only a 14 day window to visit SeaWorld Adventure Park and Aquatica with your Discovery Cove ticket, Florida Residents receive unlimited admission to both parks through January 31, 2015 with this current offer.

Additional add-ons to the current promotion include the SeaVenture experience at Discovery Cove for an additional $49 and admission to Busch Gardens for $25.

Disclaimer: The opinions expressed in this article are of the author from Orlando Local Guide. This article was sponsored as part of Marriott’s Wish You Were Here – Florida! promotion.