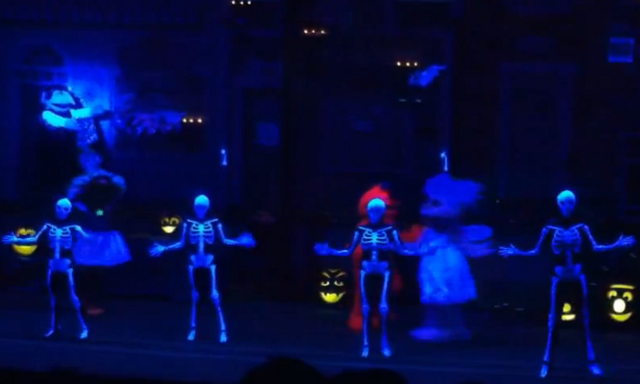 Waiting in line to watch the Sesame Street Countdown to Halloween show at SeaWorld Orlando this year, I caught a glimpse that there is a big demand for the Sesame Street characters in Orlando with the show we first attempted to watch being sold out well before the beginning and the second show having a good number of people waiting outside 45 minute’s prior to showtime.

When it comes to celebrating Halloween at SeaWorld Orlando, the Sesame Street characters take center stage.

The Countdown to Halloween show is a part of SeaWorld Orlando’s Halloween Spooktacular annual event that takes place every Saturday and Sunday in the month of October that is included with general admission. The star of the show is Count Von Count who will take you back to your childhood days as he counts spiders, ghosts, and goblins on stage and on the walls that leads to the grande finale of the Count singing the radio-friendly Monster Mash song. During the show, the count will ramble off familiar phrases such as, “1 spider, yes, yes, 2 spider, etc…”.

With Elmo and friends dancing on stage, the biggest highlight occurs when the lights go out, the black lights come on, and dancing skeletons come out on stage with the Sesame Street characters (see video below about 10 minutes in).

The Countdown to Halloween show is one of the better kid shows that I have seen at any of the theme parks in Orlando and was the highlight of the day for my 4 year old. SeaWorld Orlando has enough available owned-land to build out a separate Sesame Street theme park in Orlando. The question is, “What are they waiting for?”

Click here to read more about the SeaWorld Halloween Spooktacular event and here for our official guide of celebrating Halloween in Orlando.

This entry was posted in Attractions and tagged halloween, october, seaworld, shows. Bookmark the permalink.