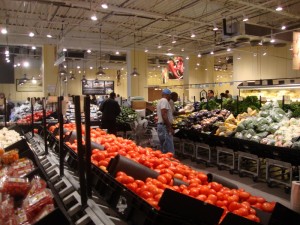 It seems that living in the sunshine state, good produce would abound at local grocery stores, but choices at the major food chains are slim and expensive.

Travel distances from farms to consumers account for a large part of the cost of fruits and vegetables at supermarkets.  It is estimated that items travel up to 1,500 miles to reach their selling destination (Source: 100 Days of Real Food).  It also doesn’t help that produce is one of the biggest profit areas for grocery chains with some items having a 75% margin (Source: Wallet Pop).

Visiting local produce stands can yield big savings plus the enjoyment of fresher, locally grown produce.  Three of the best in Central Florida are:

Happy Shopping and enjoy your fruits and veggies!