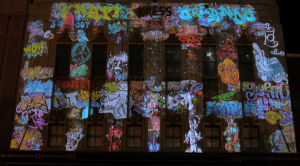 One of the best new attractions to launch in Orlando in recent years is the Magic, Memories, and You! digital projection show on Cinderella Castle at the Magic Kingdom. Now in it’s second year, another digital production show in downtown Orlando will be presented when Snap! Orlando presents their digital projection show against the historical Kress building on Orange Avenue and Church Street on Thursday, April 19, 2012 for multiple showings beginning at 8:30 PM and continuing every 30 minutes until 12 AM midnight.

The digital projection show created by Paintscaping Inc is a free event to kick off the four day photography event by Snap! Orlando that features photography from international and national photographers as well as images from local talent. Throughout the four days, there will be exhibits, projections, educational seminars, competitions, youth programs, receptions, and special events.

Click here to see the complete schedule and see the videos below of the 2011 and 2012 projection shows.

After taking in the digital projection show, take a small walk over to Lake Eola to see the nightly fountain show.