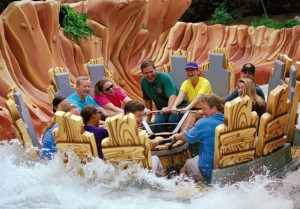 Not traditionally thought of as a spring break spot, Orlando has been making major inroads as a major spring break destination over the last few years with new attractions like the Wizard World of Harry Potter at Universal’s Islands of Adventure at Universal Orlando. In fact, Orlando overtook Las Vegas as the #1 spot for Spring Break in 2011. This is our guide to Spring Break at Universal Studios Orlando.

When one thinks of spring break, one thinks of the beach with swimsuits and bikini’s. Overall, the kids from up north want to soak up the sun and have some fun in the state of Florida. Islands of Adventure is the perfect theme park to cool off as it is the best theme park for water and flume ride attractions with Popeye’s and Bluto’s raft ride, the Jurassic Park River Adventure flume ride, and the Dudley Do-Right’s Ripsaw Falls flume ride. It is for these three attractions that you can typically see visitors wearing bathing suits under their theme park attire when visiting the park. The Popeye’s raft ride is much better than the similar type ride at Disney’s Animal Kingdom in both length and fun factor.

Another perk with spending spring break at Universal Studios is with the hotel accommodations and restaurants. The Hard Rock Hotel is the most popular choice for party-goers and is located on Universal property. They have a very large pool area with activities going on throughout the day. Dine out alfresco at the hotel at the restaurant called “The Kitchen” that has a trendier feel to it. You can take a shuttle boat from the hotel to the theme parks and Citywalk section of the resort. Restaurants at Citywalk include the Hard Rock Cafe, NBA City sports bar, and the Bubba Gump Shrimp Company seafood restaurant inspired by the movie Forrest Gump.

During Spring Break, Universal Studios has their Mardi Gras celebration taking place that features parade floats and cajun cuisine inspired by New Orleans, Louisiana. During the last three weeks of March, the Mardi Gras nights will be held every Friday and Saturday night.

When the theme parks close for the day, Universal Citywalk comes alive with it’s blend of night clubs, bars, miniature golf, movie theater, and more. The groove is Citywalk’s featured night club for dancing that is Orlando’s best dance club outside of Downtown Orlando. Rising Star is a karaoke bar that is supported by a live band and backup singers instead of the traditional sound machine and is one of most unique clubs to visit in the area. The Red Coconut Club is Universal’s answer to a fancy Las Vegas-style club. Pat O’Brien’s has dueling piano’s for a more low-key experience. Another choice is Jimmy Buffet’s Margaritaville where you can typically party to a Jimmy Buffet cover band. The Bob Marley’s inspired night club will have you feel like you are over in the Caribbean with it’s Reggae music playing.

The featured entertainment option at Universal after the theme parks close is the Blue Man Group live show that was just recently upgraded. Other options include the newly-opened miniature golf courses and an AMC movie theater showing all of the new movie releases. Outside of Starbucks, there is a row of fast food restaurants for spring breakers on a budget with the fast food restaurants of Panda Express, Moe’s, Fusion Bistro and Sake Bar, and a Burger King concept called the Burger King Whopper Bar.