Summer Movie Guide for May 2011 featuring Pirates of the Caribbean 4, Hangover 2, and Thor 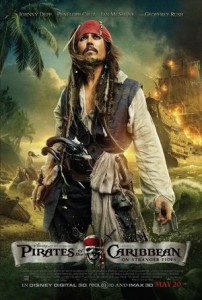 The summer movie season officially kicks off in May and features the blockbusters Thor, Pirates of the Caribbean 4, The Hangover 2, and more. This is Orlando Local Guide’s Summer Movie Guide for May 2011.

The movie season kicked off with the super-hero movie Thor on Friday, May 6, 2011. On Friday, May 13, 2011, Bridesmaids hits the theaters with Saturday Night Live members Kristen Wiig and Maya Rudolph with Ellie Kemper from the television show the Office.

Pirates of the Caribbean: On Stranger Tides is the big blockbuster that opens on the third weekend in May that stars Johnny Depp as Jack Sparrow and co-stars Penélope Cruz. Also opening on May 20th is the Woody Allen movie Midnight in Paris starring Owen Wilson, Rachel McAdams, Kathy Bates, and Adrien Brody.

The most anticipated movie of the summer season for many outside of Harry Potter, The Hangover Part II hits theaters on Thursday, May 26, 2011. This time the crew parties it up in Bangkok and Thailand and features cameos by Paul Giamatti and President Bill Clinton (really?). The Jack Black children’s movie Kung Fu Panda 2 opens on Thursday as well and features the voices of Angelina Jolie and Dustin Hoffman amongst others. The Tree of Life opens on Friday, May 27, 2011 with Brad Pitt and Sean Penn.

Click Here for local movie showtimes and to purchase tickets in advance.

This entry was posted in Calendar and tagged movies. Bookmark the permalink.