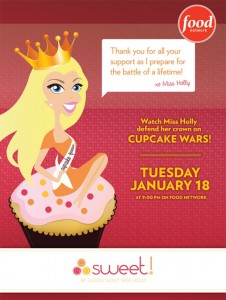 The best cupcake bakerin the United States is currently making cupcakes exclusively in our own backyard at Waterford Lakes in east Orlando.

After winning one of the initial Food Network’s Cupcake Wars competition for a Celebrity Golf Tournament hosted by George Lopez, Hollis Wilder of Sweet! By Good Golly Miss Holly, was invited back in 2010 for a tournament of former Cupcake Wars Champions to compete for a cupcake display for the 2011 Tournament of Roses Parade for the Rose Bowl and won! The Rose Parade competition aired and announced Wilder as the winner on Tuesday, January 18, 2011.

I’ve been eating cupcakes at sweet! since they opened in July of 2008 and can attest that they are the best cupcakes that you will ever taste and that is with a comparison to the Magnolia Bakery in Greenwich Village in New York. What makes sweet! different from a lot of other bakeries is the offerings of smaller, almost sample sizes cupcakes that you can bundle together and try the different varieties. In addition, you can also get a traditional size cupcake if there is one particular flavor that you enjoy especially.

Some of my favorite cupcakes that are made daily include the boston cream, key lime, peanut butter, red velvet, and white raspberry.

Click Here to read an article from Orlando Magazine about Hollis Wilder.