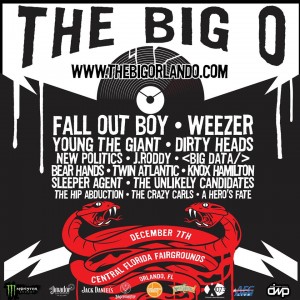 Newcomer alternative radio station X107.3 will be presenting a big music festival at the Central Florida Fairgrounds on Sunday, December 7th, 2014 called the Big Orlando that will feature headlining acts Weezer and Fall Out Boy.

Three stages will be setup at the fairgrounds with local and smaller musical acts playing on two of the stages. The main stage will feature Dirty Heads and Young the Giant leading up to music sets being played by Weezer and Fall Out Boy closing out the night.