Theatre UCF 2018/2019 Season featuring Of Mice and Men, Titanic the Musical, and More 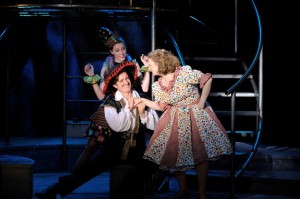 When it comes to attending and experiencing theater shows in Orlando, visitors to the area will most likely think of Disney World and it’s large-scale production stage shows like Finding Nemo at Disney’s Animal Kingdom and Beauty and the Beast at Disney’s Hollywood Studios or the dinner shows located in Kissimmee and along International Drive.

Orlando locals will quickly think of the new Dr Phillips Performing Arts Center and the touring Broadway shows that visit the area in that venue. Families with young children will think of the Orlando Repertory Theatre that puts on several children’s shows throughout the year.

There is yet another major theatre group made up of rising actors and actresses in the UCF Theatre group at the University of Central Florida that puts on several big production performances throughout the year at a fraction of the costs of attending the theme parks or touring production shows with standard adult tickets costing $20 and $10 for students.

The 2018/2019 fall season for Theatre UCF will start on September 20th, 2018 with the opening of She Kills Monsters and continues with upcoming performances featuring Hot Mikado, Of Mice and Men, Our Country’s Good, The Street of Crocodiles, The Last Paving Stone, and Titanic the Musical.  A dance concert from UCF’s dancers, choreographers and designers is also scheduled for the season.

The shows and dates for the UCF Theatre Fall 2018 and Spring 2019 season are:

A comedic romp into fantasy role-playing games and ’90s pop
culture, Agnes Evans leaves her childhood home following the death of her teenage sister Tilly. Finding Tilly’s notebook, Agnes stumbles into a journey of discovery and adventure in the imaginary world that was Tilly’s refuge.

A hilarious update of Gilbert and Sullivan’s perennial classic, Hot Mikado combines Japanese design with popular American song and dance. In a land where laws sentence people to death for almostany indiscretion, jazz, blues and gospel are spoken fluently.

Drifters George and Lennie arrive at a ranch hoping to earn enough to buy their own place. When a woman is found dead, it’s obvious the man-child Lennie has accidentally killed her. George faces a moral dilemma: should he deal with Lennie before the ranchers find him?

A feather falls from a book and consumes Joseph with childhood memories of woodworking, family dinners, an attic aviary and an upholstery shop. Inspired by the life and work of Polish writer Bruno Schulz, The Street of Crocodiles is a shifting mirage where people become birds, books fly and Death collects train tickets.

A modem comic fable about being different and sustaining the environment.

Titanic the Musical
at UCF Celebrates the Arts • Dr. Phillips Center for the Performing Arts
Story and Book by Peter Stone • Music and Lyrics by Maury Yeston
April 5, 6
Directed by Michael Wainstein

Theatre UCF performances take place at 4000 Central Florida Boulevard, Orlando, FL 32816. Parking for all shows is available in Lot C1. The box office hours are open Monday through Friday from 12 pm until 5 pm and 2 hours before performances. The box office phone number is 407-823-1500.

Click here for more information about Theatre UCF and the upcoming season.

Additionally, click here for information regarding the Broadway Across America shows coming to Orlando this year and click here for the annual Symphony Under the Stars event held at UCF each year.

Theatre UCF – Behind the Scenes Video