Tom Petty and the Heartbreakers Orlando Concert at the Amway Center on May 3rd, 2012 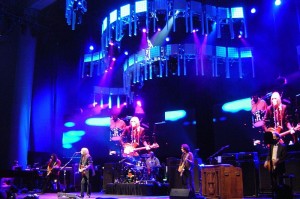 Floridians will welcome home a native son, when Gainesville legend Tom Petty hits the stage with the Heartbreakers at the Amway Center in Downtown Orlando on Thursday, May 3rd, 2012 at 7:30 PM.

Tom Petty and the Heartbreakers

An encore to their 2010 tour in support of Mojo, their first album after an eight year hiatus, Petty and the crew are slated for a rare European tour this summer.

The Orlando show is part of an announced limited US engagement as a kick off for the tour. Mojo features singles I Should Have Known It and Jefferson Jericho Blues but with 35 years of fan favorites out there, prepare for the set list to draw from a long list of classics like Into the Great Wide Open, American Girl, and Free Falling.

Tom Petty in Gainesville in 2006

This entry was posted in Calendar and tagged amway center, concerts, rock. Bookmark the permalink.