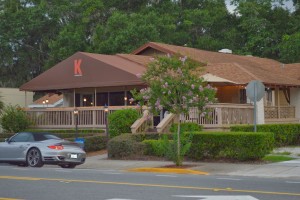 Fresh Italian at Millenia and Lake Ivanhoe, American in College Park, and Sushi in Baldwin Park are some of the best places to have a meal to celebrate Valentine’s Day in 2016.

You will also find the best steaks in all of Orlando and Orlando’s Best Restaurant overall. This is Orlando Local Guide’s Top 10 Romantic Restaurants in Orlando for Valentine’s Day 2016 including College Park and Baldwin Park.

For this Orlando Top 10 List, we will be ranking all of the areas around Orlando that are not included in the lists above. Fortunately for us locals, several of these restaurants are the crème de la crème that the city of Orlando has to offer in romantic dining and cuisine.

#1. Le Coq Au Vin – Le Coq Au Vin is Orlando’s best overall restaurant, period. Serving Orlando since 1976, this French restaurant is unlike any other restaurant within the city. A small independent restaurant off the main drag and stylized with a 1970’s French Country theme, the style and decor doesn’t work for everyone but it is what makes this restaurant great to this particular writer. Start off your meal with some French Onion Soup and Gruyere Cheese Soufflé with Grits. For dinner, go with the signature item of Braised Chicken “Coq Au Vin” that is cooked in a red wine sauce with mushrooms, bacon, and onions. The Chocolate Soufflé to end the meal is what brings it all together. Paired with a nice glass of French Wine, this is one of the best dinners you will ever eat. Le Coq Au Vin is at the top of every conceirge’s list for best places to dine in Orlando. Take a walk in the rose garden and along the lake at nearby Cypress Grove Park before your meal.

#3. K Restaurant – Our first of two restaurants in College Park, a historical part of the city just 3 miles northwest of Downtown Orlando, is simply titled K Restaurant. K is an artsy restaurant on College Park’s Edgewater Drive that is owned and managed by Kevin F. Fonzo, a James Beard Award nominee, who in 2010 prepared a meal with several other restaurateurs at the James Beard House in New York City. Get the Porcini Dusted Filet Mignon at K Restaurant when you go and you won’t be disappointed.

#4. RusTeak Restaurant & Wine Bar – RusTeak is one of the more casual restaurants on our list but with great food and great wine in the heart of Orlando’s College Park neighborhood. This is one of two locations for RusTeak (the original is in Ocoee), menu items include a 6oz center cut filet served with crusted asparagus, red-skin garlic mashed potatoes & a shiitake mushroom demi-glace or the rosemary rubbed rack of lamb with gruyere risotto, sauteed porkbelly and kale finished with a balsamic glaze.

#5. Gargi’s Lakeside – Leaving College Park on Lakeview Drive heading back towards Downtown Orlando on Orange Avenue takes us to one of our most overlooked restaurants on all of our Valentine’s Day lists in Gargi’s Lakeside on Lake Ivanhoe. Gargi’s serves traditional Italian fare in a small and formal inside space while a large outside covered patio awaits when the weather warms up that is often used for receptions on Lake Ivanhoe. The patio gives some pretty spectacular views of Downtown Orlando and makes Gargi’s one of the best lakeside dining restaurants in the city of Orlando. 2016 will be the last time that you will be able spend Valentine’s Day at Gargi’s Lakeside as the owner of the restaurant will be retiring after 30 years.

#6. Seito Sushi – Seito Sushi is the most romantic restaurant in Baldwin Park that provides a classy and open space to serve great sushi and tempura. Seito has two locations around Orlando with the Baldwin Park location being the best of them with it’s outdoor seating and views of New Broad Street and Lake Baldwin. Catch a movie at nearby Fashion Square Mall Premiere Theater after dinner.

#7. The Osprey Tavern – The Osprey Tavern is our newest entry for 2016 that shares ownership with Seito Sushi across the street in Baldwin Park and specializes in Raw Oysters to start off your meal and a wide selection of specialty-prepared upscale selections including Fish and Chips that comes with Atlantic Flounder, house smoked fries, malt vinegar, lobster aioli or the Allen Brothers Beef Rib Eye with a pub rub, scalloped potatoes, valdeon cheese, sweet tooth mushrooms, and onion marmalade. Start off your meal with a Charcuterie or Cheese Board.

#8. Norman’s – Norman Van Aken is known internationally as “the founding father of New World Cuisine” and is the only Floridian inducted into the prestigious “James Beard list of ‘Who’s Who”. When the Ritz Carlton opened their doors in Orlando in 2003 at the Grande Lakes Resort, they recruited Norman Van Aken to open his signature Norman’s restaurant at their hotel, and with it, the best fine dining restaurant in the city. Go for the 50 minute or 80 minute couples massage at the hotel’s spa prior to eating at Norman’s.

#9. Bull and Bear – When the Ritz Carlton and JW Marriott opened their hotels together in 2003 with a lazy river pool at the JW Marriott, signature golf course, and a convention center set in-between the two hotels, they changed the game of the hotel industry in the Orlando market. In 2009, Hilton took Marriott’s blueprints and opened the Hilton Bonnet Creek and the first Waldorf Astoria outside of New York City on Disney property at the Bonnet Creek Resort. The distinguished restaurant of the two hotels at the Waldorf Astoria is the namesake Bull and Bear Restaurant that serves USDA-Certified Angus Beef Prime, the highest quality grade available in the United States. Another signature hotel, another signature spa. Go for the couples massage at the Waldorf Astoria Spa by Guerlain prior to your signature and romantic Valentine’s Day dinner.

#10. The Venetian Room – Located just outside the gates of Walt Disney World on World Center Drive is the Contemporary-French Restaurant The Venetian Room at the Caribe Royale Hotel. This AAA Four-Diamond Award Winning Restaurant specializes in Filet Mignon, Chilean Sea Bass, Loin of Lamb, and Dover Sole. Finish off your meal with a Grand Marnier Souffle or the Carrot Bomb. Valet Parking at the hotel is free when validated at the restaurant.