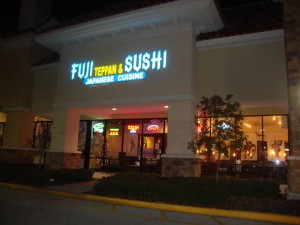 The University of Central Florida, or UCF, has grown to be the second largest University in the Country and the communities in east Orlando around UCF having grown up around it with the city of Oviedo to the North, the Waterford Lakes neighborhood to the south, and the city of Winter Park to the West. The overall restaurant and bar scene has grown exponentially in the UCF area in the last few years with the area having the best selection of fast-casual restaurants in all of Orlando. Outside of these restaurants, UCF also has added several traditional sit-down restaurants to provide a complete top 10 list Valentine’s Day selection all on it’s own that it didn’t have just a few years ago. The city of Winter Park’s Top 10 Restaurants for Valentine’s Day can be found here. This is Orlando Local Guide’s Top 10 Romantic Restaurants around UCF for Valentine’s Day 2015 including Oviedo and Waterford Lakes.

#1. Fuji Yama Sushi – So when we originally unveiled our list for the top 10 romantic restaurants around UCF for Valentine’s Day in 2013, we had the Houlihan’s restaurant on University Boulevard listed in this spot. After correctly being informed by one of our readers in the comments section below that this location has been closed since Fall 2012 (the East Colonial restaurant is the closest Houlihan’s in the area now) we had bequeathed our first pick for 2016 to Amanda to help get things started and she recommends Fuji Yama Sushi at the intersection of University and Dean.

Our 1st of two sushi restaurants on the list, Fuji Yama Sushi has over 63 sushi rolls to choose from including some of the chef specialties of Crazy Mackerel, Pink Lady, American Dream, and Sexy On The Fire. In addition to sushi, Tempura and Teppan menu items are available as well including several teriyaki dishes and an 8 ounce filet mignon.

#2.  Giovanni’s Italian Restaurant & Pizzeria – You don’t have to travel far from the main campus to reach our first Oviedo restaurant in Giovanni’s Italian Restaurant, one of the first restaurants in the area, that has had staying power and is a favorite by both students and residents of nearby Oviedo, Florida. Giovanni’s specializes in your traditional Italian dishes in a casual environment served with garlic bread to start. I recommend the Tortellini Giovanni with Grilled Chicken on top. The Oviedo location is one of five area locations for this family-owned local chain.

#3. Peppino’s Ristorante Italiano – Peppino’s is a free standing family-owned Italian Restaurant that is a short drive from the main campus on Alafaya Trail in Oviedo that is a little bit of a throwback of sorts with the look and feel with formal tablecloths and napkins. Steak Gorganzola and Veal Parmagiana are mixed in with traditional Italian dishes with an Italian Wedding Rum Cake on the menu for dessert.

#4. Kobe Japanese Steakhouse – East Colonial, just West of Alafaya Trail, is making a comeback of sorts in the UCF and Waterford Lakes area with the redevelopment and opening of a Mellow Mushroom and Kobe Japanese Steakhouse. Kobe is a popular restaurant for special occasions already with their entertaining Hibachi Grills and this is one of the nicest ones out there just being built in 2010 with LED lighting and other features.

#6. Bahama Breeze – One of three Bahama Breeze restaurants in Orlando (the others being on International Drive and Altamonte Springs), this is the newest addition of Bahama Breeze restaurants to Orlando that features Caribbean Cuisine and live island music. Menu items include the Mojo-Marinated Pulled Pork that is served over sweet plantains with a sweet and smoky barbecue sauce or the Steak Oscar, an 8-oz. center-cut sirloin, topped with jumbo lump crab-meat and citrus butter sauce that is served with grilled asparagus and mashed potatoes.

#7. Fuji Sushi – If you like Hibachi, Teppan, Sushi, and Japanese cuisine for special occasions, the Waterford Lakes area has you covered. First Kobe on Colonial and then Fuji Sushi at Waterford Lakes in the Waterford Towers Shopping Plaza. Fuji Sushi is a smaller intimate spot in Orlando that has hibachi tables to sit with larger groups or private booths where you can order off the kitchen menu or the Teppan Grill.

#8. Marlow’s Tavern – Both Cooper’s Hawk (#9 on our list below) and Marlow’s Tavern have brought a very sophisticated element to the Waterford Lakes area that did not exist a few years ago that are both within walking distance to the Regal Cinemas Movie Theater. Marlow’s Tavern falls under the Gastropub category where there are hints of southern cuisine in an upscale but cozy atmosphere. Menu items include the Grilled Turkey Meatloaf made of Golden Legacy Farms Wild Turkey, Seared Tomato Bacon Jam, Sweet Thyme, Shaved Brussels Sprout, Creamer Potatoes, Onion Confit, Asiago and Parlied Oil. Another option includes Shrimp and Grits with White Cheddar Grit Cake, Spinach, Roma Tomato, Shallot and Roast Tomato Beurre Blanc.

#10. Bonefish Grill – Bonefish Grill is one of our favorite seafood restaurants throughout the Orlando area providing fresh seafood and grilled steaks at an affordable price as compared to many of the other restaurants on our top romantic list. Bonefish is owned by the same company that owns Outback Steakhouse, Carraba’s, Roy’s, and Fleming’s and features entree’s such as salmon, grouper, mahi mahi, and chilean sea bass

Waterford Lakes Things To Do

In addition to going out for a nice meal, you can also catch a movie at the Regal Cinema Movie Theater, go bowling at the Firkin & Kegler or Boardwalk Bowl Entertainment Center, go miniature golfing at Congo River Golf, or get a light-night drink at the Social House (new for 2016) or Miller’s Ale House.