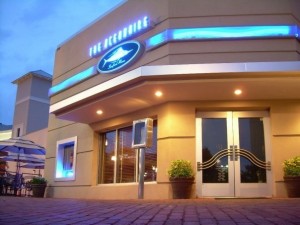 For our recommendations on spending Valentine’s Day on International Drive, the top 10 romantic restaurant choices over the years may have varied over time but the dining scene definitely changed with the most recent incarnation of Pointe Orlando a few years ago.

#2. The Oceanaire Seafood Room – Immediately located next to the Capital Grille in Pointe Orlando is The Oceanaire Seafood Room. The Oceanaire is the first of two Seafood Restaurants on our list that we recommend that has a setup in which the service is delivered as if you are on an upscale restaurant on a cruiseline. The service matches the quality of the dishes that we have experienced at The Oceanaire in which you can go for the Chesapeake Bay Style Crab Cakes, Stuffed Flounder Florentine, or the “Black and Bleu” Florida Black Grouper. On the Meat offering, Filet Mignon, New York Strip, and Pork Chop’s are available.

#3. Maggiano’s Little Italy – Our third restaurant at Pointe Orlando, Maggiano’s Little Italy, is the upscale big-sister restaurant to Romano’s Macaroni Grill. We like Romano’s in our Waterford Lakes and UCF Top 10 romantic list and we also like Maggiano’s on this list. Some of the interior of Maggiano’s looks similar to Romano’s but with more upscale touches and the menu is different in that the selections are meant to be shared (similar to Buca di Beppo). Menu items include Chicken & Truffle Tortelloni, Gnocchi & Italian Sausage, Chef KB’s Lobster Carbonara,  Taylor Street Baked Ziti, and Mom’s Lasagna with Marina or Meat Sauce.

#4. Marlow’s Tavern – At this point of the top 10 list, I first have to start this entry with a disclaimer that I was a guest of Marlow’s Tavern when the restaurant first opened in Pointe Orlando in 2012. Stating that, Marlow’s Tavern belongs on the top 10 list of best romantic restaurants because the dishes are great and the restaurant provides a small and intimate space that is great to share in with a loved one. If you enjoy going to other gastropubs in Orlando like the Ravenous Pig in Winter Park and the Rusty Spoon in Downtown Orlando, you will also enjoy Marlow’s Tavern. Southern-inspired dishes with grits on the side are at the center of the menu. Click here to read our full review.

#5. Taverna Opa – If our first four restaurants at Pointe Orlando deliver a nice and quiet romantic experience for Valentine’s Day, our next two restaurant experiences deliver  something a little more lively and fun. Taverna Opa is one of the best Greek Restaurants in Orlando that combines adventurous Mediterranean dishes with belly dancers on tables that encourage guest participation as guest and servers throw napkins up in the air.

I would consider myself a pretty quiet person in general but the people at Taverna Opa really help to setup the dining experience in a comfortable way to help you let your guard down and just have a good time. Opa!

Get our favorite Saganaki Flaming Cheese to start and then choose from Lamb Chops, Lamb Shank, an Oak Grilled Pork Loin, Chicken Artichoke, or Stuffed Peppers as a meal among others.

#6. B.B. Kings Blues Club – If you enjoy live music with your meal, B.B. Kings Blues Club is a great romantic option for Valentine’s Day with a little bit of Memphis bar-b-que at the top of the menu items along with other hearty items like Chicken Fried Chicken and Born on the Bayou Shrimp and Grits. Fine dining it is not, but B.B. Kings Blues Club’s B.B. King All Star Band that plays at 7:30 pm and 11:30 pm is one of the best cover bands that we have heard in the city that plays many classic cover songs that you will be sure to recognize.

Talk of the Town

#7. Charley’s Steakhouse – Our next two restaurants come from the “Talk of the Town” Restaurant Group that have been serving great steaks and seafood in the International Drive area for many years. Charley’s Steakhouse serves up some of the best steaks in Orlando that features only grain-fed USDA Prime & Choice beef that is aged on-site for 4 to 6 weeks prior to being served. Steaks are flame-grilled over a 1200-degree open pit that is fueled with a combination of oak & Florida citrus wood for flavor.

#8. Fishbones – Not to be confused with the Bonefish Grill Seafood chain (which is also great and has a location on Restaurant Row), Fishbones is a pricier and upscale restaurant with very similar dinner entree’s as Charley’s Steakhouse nearby but with a focus more on Seafood over steaks with fresh fish that varies daily that may include Salmon, Grouper, Ahi Tuna, Sea Bass, and Snapper. Filet Mignon, New York Strip Steak and Prime Rib is also available for those patrons looking for a meat item.

#9. Cafe Tu Tu Tango – Cafe Tu Tu Tango has been around serving delicious small-plates of courses meant to be shared before anyone else out there was doing it. Cafe Tu Tu Tango is a unique place and was a favorite restaurant of ours during our college years. Some of their most popular dishes are the Cajun Chicken Egg Rolls that are filled with roasted corn, chedder and goat cheese, and a Creole mustard dipping sauce and the Oriental Marinated Steak Skewers with ginger-soy aioli. The atmosphere is artsy with the slogan stating that the restaurant has “Food for the Starving Artist”.

Jack’s Place – Honorable mention goes out to Jack’s Place at the Rosen Plaza Hotel within walking distance of Pointe Orlando. Jack’s Place has been open in Orlando for several years that has a personal story that goes along with the establishment where you will enjoy the history of the pictures that surround you during your meal and also on the quality of the appetizers and entree’s that are served. Jack’s Place is not as fancy or modern as some of the other restaurants that we have included (or have not included) on our list but it falls into the same category of another local favorite of ours, Le Coq au Vin, in it’s charm. Click here to read our full review of Jack’s Place.

Things to Do on International Drive on Valentine’s Day

Making recommendations on things to do along International Drive on a date night out like Valentine’s Day is like picking out a flavor of ice cream at an ice cream parlor. There are a lot of options to choose from that someone is going to enjoy but probably only five or six that are going to appeal to you.

There are a few miniature golf and go-kart attractions as well as the Ripley’s Believe or Not Museum. If the Pac Man cafe mentioned previously sounded like a good time, there is a Dave and Busters arcade along I-Drive. We also really like the iFly indoor sky-diving attraction but this is something that you will want to do before you eat dinner. Kings Bowl offers bowling for couples that you can read about in our review here. The Orlando Eye, Madame Tussauds, and SEA LIFE Aquarium are also now open on International Drive.

Of course, there are also the Orlando dinner shows of Sleuths Mystery Dinner Show, Pirates Dinner Adventure, and the Treasure Tavern Dinner Show along I-Drive that can be fun if you are dining with a group of friends or family.

Things to Do at Pointe Orlando

At Pointe Orlando, the Orlando Improv has standup comedy that is always a lot of fun, the Regal Cinema Movie Theater to catch a movie, Blue Martini to get a late-night drink, as well as live music at BB King’s Blues Club mentioned previously.

Note that the show can get a little messy with flying paint and sand so you will want to wear something you don’t mind getting ruined (jeans and a white t-shirt works).

There are several other restaurants that we could have included if this was a Top 12 or 15 list but we capped it at 10 for consistency sake. Other restaurant choices that we can recommend on International Drive include Texas De Brazil, Napa at the Peabody Hotel, and Spencer’s for Steaks and Chops at the Hilton Orlando, Everglades Restaurant at the Rosen Centre, Cuba Libre and Tommy Bahama Restaurant and Bar at Pointe Orlando.

If you are going to be spending the day at SeaWorld, we recommend dining at Sharks Underwater Grill with real live sharks swimming around you while you dine.