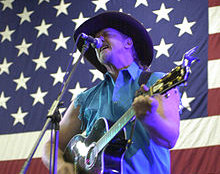 Trace Adkins is scheduled to appear in concert at Sea World in Orlando Florida, on February 18th, 2012 as part of their Bands, Brew and BBQ annual event. The event starts at 10:00 a.m. and ends at 10:00 p.m. The concert will take place inside the Bayside Stadium at 4:30 p. m. Seating is available on a first come, first seated basis.

Trace Adkins, a well known country singer and actor, will be joining the weekend of concerts and events scheduled at the annual Bands, Brew and BBQ. There will be a Beer Garden with over 50 crafted beers from both domestic and international breweries and sizzling barbecue meats and chicken.

Trace Adkins latest album Proud to be Here is a host of songs of passion and tribute. Trace Adkins is also a humanitarian who has recently hosted TV talk shows and also appeared as a finalist on The Celebrity Apprentice. Trace Adkins also played a role in the feature film The Lincoln Lawyer.

Trace Adkins has charted more than 20 singles on the Billboard country music charts, including the Number One hits (This Ain’t) No Thinkin’ Thing, Ladies Love Country Boys, and You’re Gonna Miss This.