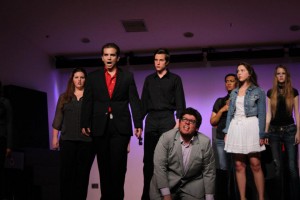 The University of Central Florida Opera is kicking off the 2014-2015 season with its 10th-annual gala concert entitled “It’s a Grand Knight of Singing” on November 15th and 16th, 2014 in the Visual Arts Building on the main campus of UCF.

“It’s a Grand Knight of Singing” celebrates a decade of growth for the UCF Opera program showcasing a variety of famous works that have defined the art of opera.

Performances will feature a compilation of popular scenes by highly regarded composers, including Henry Purcell, Wolfgang A. Mozart, Gaetano Donizetti, Georges Bizet, and Giuseppe Verdi. Through creative skits and presentations performed in collaboration with Theatre UCF, the gala will also showcase the high level of artistry within the university’s School of Performing Arts.

“Opera at UCF has grown exponentially in the last 10 years,” said Thomas Potter, UCF Opera executive director. “This gala gives us the opportunity to celebrate our progress through the craft we know best: music.”

Ticket and event information is available at www.music.ucf.edu/opera. Cost to attend is $15 general admission, $10 seniors, $5 under 18, and free for persons with a current UCF I.D. including students, faculty and staff.