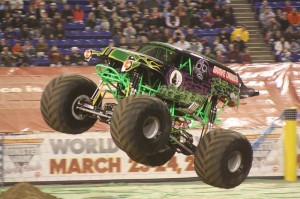 For 22-year-old Universal Technical Institute graduate Clinton Faircloth, his daily job responsibility includes helping wrench two massive 10,000-pound vehicles that have 1,500 horsepower and cost more than a quarter million dollars each. Meet Grave Digger and Madusa – the Monster Jam trucks that Faircloth spends most of his time working on.

And he’ll definitely be hitting the road to see more of the world – traveling for a total of at least four months during the year. To date, Monster Jam has been seen by more than 4 million fans in almost 40 international cities – including Abu Dhabi, Paris, London and Sydney, Australia.

“For me, this is an absolute dream job,” said Faircloth. “I come from a small town, so this is a big opportunity. I grew up watching Grave Digger, and it’s surreal that I’m now behind the scenes. I’m so proud to be a part of this team and am learning so much.”

Monster Jam technicians can spend approximately 50 hours of work on each truck preparing for the next show.

“Depending on how the vehicle performs or if there are any problems, there’s lots of hours involved,” said Faircloth. “When a bug needs to be worked out, we can be there until 2 a.m. and then have to get up at 8 a.m. to prepare for the show. But there’s so much adrenalin and energy – and reward in knowing you’re working on a truck that a screaming crowd of 70,000 fans are waiting to see.”

Feld Motor Sports recruited Faircloth while making a visit to UTI’s Orlando campus to discuss the growing need for technicians as they rapidly expand shows.

“Our Monster Jam Fleet is one of the largest and most sophisticated motor sports vehicle fleets in the world”, said Ryan McSpadden, VP-Sales for Feld Entertainment, “Having high quality technicians from UTI are a key component in our overall operation.”

Coincidentally, Faircloth’s hometown (Avon Park, Fla.) is about a half hour from Feld Motor Sports’ new state-of-the-art service shop in Ellenton, Fla. The 700,000-sq.-ft shop is the second-largest building in the state, with 144 garages, a fabrication department to build parts and a 72,000-sq.-ft. Monster Jam section. It’s a technician’s ultimate playground.

“We hire people like Clinton who have an excellent technical ability and also a passion and personality for what we do,” said Susan Kozlowski, director of human resources, Feld Motor Sports. “Being part of our team is not just a job; it’s an adventure and lifestyle – so it’s important that we find the right type of people who can commit to making it a career.”

Putting UTI’s Skills to Use

At 6 feet tall, Faircloth barely can see over one of the 6 ft. 6 giant wheels on Grave Digger.

“Obviously, the differentials are about five to six times larger than regular vehicles,” said Faircloth. “So I’ve been learning a lot about the planetary gears and how to maximize torque – things that I’ve learned at UTI, but on steroids.”

Faircloth’s advice to future UTI grads is to work hard, focus on professionalism and employment goals – then set a roadmap for success.

“We are honored to have employers such as Feld Motor Sports come to campus,” said Mike Coburn, employment services director at UTI’s Orlando campus. “It’s an excellent opportunity for our graduates to participate in a very rewarding program. Their ultimate reward is hearing those 50,000 plus fans cheering for their favorite team, especially when the technicians helped make that happen.”

As for Faircloth, he says he’s in this career for the long haul.

“Ever since I was little, I’ve been wired to work on cars,” he added. “Now I do this for a living with high-tech Monster Jam trucks. I couldn’t be happier.”

This entry was posted in News and tagged sports. Bookmark the permalink.