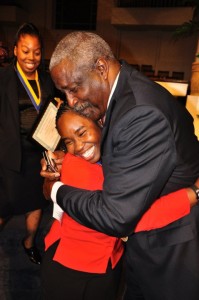 What do drugs, prisons and changing a community have in common?  In the case of William Andrews, Senior Pastor of The Heart of Mercy Community Church of the Nazarene on Mercy Drive in Orlando Florida, they are all part of the package.  He spent seven years living on the streets of Orlando; fifteen years in and out of prisons on what he calls his installment plan.  A total of twenty years addicted to “every kind of drugs one could think of” until the day he came face to face with Christ and his life has never been the same since.

Pastor Andrews attended Springfield Technical Community College in Springfield Massachusetts earning an Associate Degree in Broadcast Journalism. He attended the University of Massachusetts, Boston campus where he studied political science.  William was ordained elder in the Church of the Nazarene in 2005 after finishing his ministerial studies at the Nazarene Bible Institute of Central Florida.


The changes Pastor Andrews is making in the community began at Restore Orlando Inc., where he served as Senior Pastor and as a member of the Board of Directors.  William was appointed by City Commissioner Robert Stuart to serve as one of the representatives for the City of Orlando on the Central Florida Regional Commission on Homelessness. His involvement in the community as one of the founders of the Mercy Drive Corridor Initiative along with First Presbyterian Church of Orlando and the Jobs Partnership of Florida illustrates his concern for those he ministers to.  The number of unemployed or underemployed people in his community far exceed the community norm and Pastor Andrews has set out to change that, one person at a time.

Recognizing a need and responding with a solution is a key part of what makes Pastor Andrews so vital to the Mercy Drive Community he serves.  In early 2011 supposedly to cut costs, the Orange County School Board discontinued bus service to elementary students living in the Mercy Drive area because they lived closer than two miles to Ivy Lane Elementary School.  This meant those young people in kindergarten and up would have to walk up to 2 miles along a street with almost 150 registered sexual predators nearby, cross 6 lanes of traffic on West Colonial Drive and then another several lanes of traffic on Old Winter Garden Road.

Pastor Andrews knew this was wrong, but instead of just complaining he stepped up and offered to use his church’s bus and van to transport those students to school.  5 days per week over 70 students are taken to and from school in the church bus and van for a flat fee of $5.00 per family.  After coming into contact with the students regularly Pastor Andrews recognized that many of them lacked fundamental reading and math skills, so he started an after school tutoring program at his church to help the students gain those skills.  He has partnered with other institutions and recruited volunteers to work with the students, including a number of high school students from The Christ School at First Presbyterian Church.

Click Here to learn more about the Jobs Partnership of Florida and the difference it is making in the city of Orlando.

This entry was posted in Life and tagged community service, people. Bookmark the permalink.