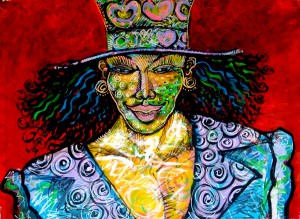 The Zora Festival is an annual festival that is named after the author Zora Neale Hurston, who is best known for writing the novel “Their Eyes Were Watching God”. The festival also pays tribute to the town of Eatonville, one of the first all-black towns to be formed after the Emancipation Proclamation in 1863 that was incorporated on August 15, 1887. The town is just a few miles north of Downtown Orlando.

The picture above was created by Charles Bibbs who was featured at the 2013 festival where he held an educational activity and interaction with students on the Friday morning of the festival for Education Day.

Festival of the Arts