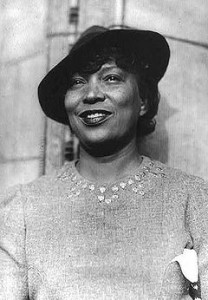 Zora Neale Hurston grew up in the historic town of Eatonville, Florida, a small town just six miles north of Downtown Orlando along Interstate 4, that was one of the first all-black towns to be formed after the Emancipation Proclamation in 1863.  Hurston was an American author that was best known for her novel Their Eyes Were Watching God, that was published in 1937.

Their Eyes Were Watching God

Their Eyes Were Watching God, included in Time Magazines 100 Best English-language Novels from 1923 to 2005, is a novel about a women in her early forties, named Janie Crawford, telling her life story about moving to the town of Eatonville to start a new life working at a general store where her husband becomes Mayor. After Crawford’s first husband dies in the novel, she runs off with a gambler where a lot of drama pursues, and she then returns back to Eatonville after needing to shoot her second husband in self-defense after he is bit by a rabid dog during a hurricane.

In 2005, Halle Berry played the part of Crawford in a Made-For-TV movie with the same name as the book that was produced by Oprah Winfrey’s Harpo Studios.

Since 1990, the Town of Eatonville has held a celebration of Hurston’s life and literary works with the Zora Neale Hurston Festival of the Arts and Humanities, or Zora! Festival, that is held in the later part of January each year.

On January 7th, 2014, Google honored Hurston’s 123rd birthday on their homepage with the following image below:

Click Here to watch a video from the New York Times on Zora Neale Hurston and the Town of Eatonville.

This entry was posted in Life and tagged arts, eatonville, january, people. Bookmark the permalink.