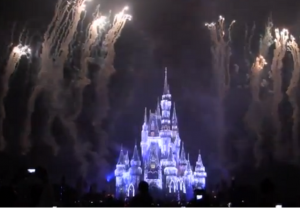 Holiday Wishes at the Magic Kingdom is a holiday edition of it’s nightly fireworks show that is shown throughout the year on select nights. The Holiday Wishes show is around 12 minutes in length that is narrated by the voice of Jiminy Cricket.

As snowflake and icicle lighting effects illuminate on Cinderella Castle,  Tinker Belle kicks off the Fireworks show by flying overhead from the castle as the tunes of Jingle Bells and Sleigh Ride begin to play with Fireworks all behind the castle. As the castle goes dark at times to accentuate the fireworks behind it, I’ll be home for Christmas begins to play.

Midway through the show, Cinderella Castle turns red to give the impression of a Santa Claus hat as Santa Claus is Coming to Town begins to play that is mixed in with Jolly Old St Nicholas playing immediately afterwards. Rudolph the Red Nose Reindeer finishes off the Santa Claus portion of the show.

After the songs about Santa are finished, the castle turns green like a Christmas Tree as “Oh Christmas Tree” begins to play that is then followed by a medley of songs from The Nutcracker.

As a quick reference to “Have Yourself a Merry Little Christmas” switches from the Nutcracker portion of the show to an original “Wishes” segment, fireworks explode all around the castle and the park as perimeter fireworks are launched from all sections around the Magic Kingdom. As the fireworks begin to dim, the castle lights immediately light back up (see picture above).

Holiday Wishes is performed once a night during Mickey’s Very Merry Christmas Party on select nights between November 9th, 2012 and December 21st, 2012 at 9:30 pm between the two parade showings.

From December 22nd, 2012 through December 31st, 2012, Holiday Wishes is performed during normal park admission on most nights at 10 pm with performances at 8:30 pm on December 30th and 31st. Fantasy in the Sky Fireworks are also shown on December 30th and 31st at 11:50 pm with a New Years Eve Finale.  The Holiday Wishes show from December 22nd, 2012 through December 31st, 2012 does not contain the perimeter fireworks at the end.

Holiday Wishes Video (Inside the Magic)