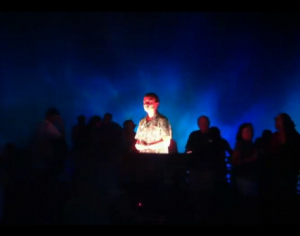 SeaWorld recently opened their first 3D attraction in Orlando called Turtle Trek that features both digital and live sea turtles, manatees, and all other kinds of fish in a new attraction that features bleeding-edge 3D projections in a planetarium dome type setting.

SeaWorld is taking a broad step with Turtle Trek setting up the stage to be known just as much for turtles as it is now known for killer whales and dolphins. In a way, this feels like a step by SeaWorld to challenge and one-up Epcot’s Turtle Talk with Crush attraction at Disney World. The attraction can be broken up into three parts of pre-show, the main attraction, and post-show.

Before entering the theater, you stand and wait at the entrance viewing sea turtles, manatees, and other sea life. The next room awaits you with a member of the SeaWorld staff introducing you to the story of the turtle whose journey you will see through his eyes and identifies some of the dangerous encounters you might experience with crabs, sharks, and fisherman’s nets.

After being given the introduction, the visitors to the park enter the dome (see picture above) in a standing-room only area that will soon be surrounded by 3D images in-front, behind, and above them. The technology behind Turtle Trek is a first in Orlando that is a cross of the circle-vision movies and Turtle Talk with Crush attraction at Epcot, the 3D PhilharMagic attraction at the Magic Kingdom, and the Cinedome at the Orlando Science Center.

As you venture along the beach and navigate through the ocean as a sea turtle, you will walk by crabs and seagulls, swim with sharks, dolphins, and manatee’s where some of the digitally produced animals are swimming all around you. At one point, there are jellyfish all over the room and completely surrounding you.

The show teaches conservation without being preachy and helps to explain why all lights need to be out on the beach shorelines of Florida when it is turtle-nesting season (the lights confuse the turtles of where the ocean or gulf is located).

After departing the theater, there is a video game that most children can pick up that uses a turtle for a controller to navigate around the ocean that is similar to the 7-minute movie you just finished watching (see video below). This area also contains the above-ground viewing areas for the sea turtles and manatees at SeaWorld.

Overall, this was a fun attraction to experience and was the highlight of the day for my 3 1/2 year old who asked if we can go back to it the next time we visit the park. If you like the other attractions that are mentioned above that I compared this attraction, then I think you will like Turtle Trek as well.

This entry was posted in Attractions and tagged movies, seaworld, shows, wildlife. Bookmark the permalink.