Choo Choo Soul with Genevieve at SeaWorld on January 26th, 2013 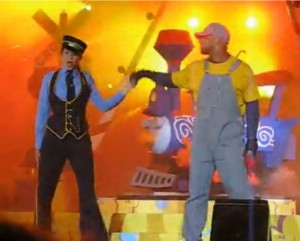 Choo Choo Soul with Genevieve will be appearing at SeaWorld on Saturday, January 26, 2013 as part of Sea World’s Just For Kids family concert series.

This program starring Genevieve Goings entertains both parents and children with the same music that can be seen on the Choo Choo Soul programming on Disney Junior. Presenting contemporary and animated versions of ABCs, 1-2-3’s and understanding good manners, Choo Choo Soul is a hip and diverse pair that educates children by using music on a train.

Choo Choo Soul is an entertainment act for children with singer Genevieve Goings, who performs as a hip-hop train conductor along with her colleague Constantine DC Abramson, who acts as a railroad engineer. The pair have entertained children through video games, CD albums, television, and now in live concerts. The Parents’ Choice Award recognized the group for children’s television in 2007.