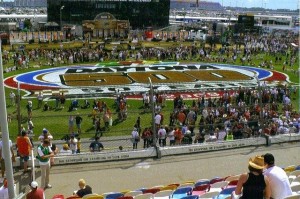 The Great American Race, the Daytona 500, will take place at the Daytona International Speedway in Daytona Beach on Sunday, February 21st, 2016 at 1PM.

About an hours drive from the city of Orlando, the Daytona 500 is the final event of Speedweeks and is the first official event of the NASCAR Sprint Cup Series (formerly the Nascar Winston Cup Series). The Daytona 500 is widely considered the premier stock-car racing event of the season that is rich in history and vintage finishes. The drivers will drive 500 miles over the course of the race at speeds hovering around 200 miles per hour.

The Nascar Sprint Cup Series is the top racing series of NASCAR, the major leagues of stock car racing. The champion is determined by a point system where points are given according to finishing placement and laps led. After the first 26 races, the 10 highest ranked drivers, plus the two drivers with the most race wins who are ranked from 11th through 20th in points, are seeded based on their total number of wins and compete in the last 10 races with the difference in points greatly minimized. This is called the Chase for the Championship.