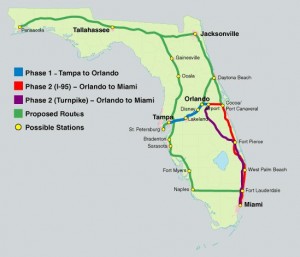 Update – March 4, 2011: On Friday, March 4, 2011, the governor of the State of Florida, Rick Scott, put his ideological ideas on how money should be spent at the national level, with his Fox News Press Conferences, at the expense of the citizens that elected him in the state of Florida by single-handily killing high-speed rail that had large bi-partisan support within the State. Below is what could have been, and what someday might be:

Orlando will be the first city in the United States to have high-speed rail when a link is created between Orlando and Tampa Bay in 2015. The current stops in Orlando will start from the international airport, stop at the convention center on International drive, and then Disney. In addition to the high-speed rail, Orlando will be implementing another rail system called Sun-Rail that will serve the local community and travel North-South through all of the major cities in the area along I-4 including several stops in Downtown Orlando and downtown Winter Park. Sun-Rail is positioned to be operational in 2013. At the time of this writing, there is not a common stop between the lines as they were planned and approved separately, but there are plans in the works for the two lines to meet with the most logical spot of the international airport. The two lines will change the way a lot of visitors and locals get around Orlando and the state in general and change the cities that are on the lines to continue to develop into walkable communities. CNN recently ran a story on the high-speed rail line that can be accessed here.