2015 Taste of Pointe Orlando on International Drive on April 19th 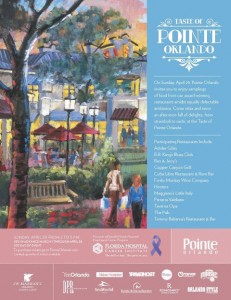 A majority of the best restaurants on I-drive are located in Pointe Orlando that is located about a block away from the Orange County Convention Center. With the names listed above, there will a wide choice of food options including Italian, Cuban, Mexican, BBQ and Greek dishes.

Outside of the sit-down restaurants, Pizzeria Valdiano has some of the best pizza in Orlando with several locations around the city and Ben and Jerry’s will be providing ice cream.

Proceeds from the event will benefit the Esophageal Cancer Program at Florida Hospital Cancer Institute.

Tickets to the event cost $30 in advanced or $35 on the day of the event that covers the costs of the food and can be purchased here.

After the official event ends at 5pm, take in a movie that the Regal Movie Theater located at Pointe Orlando and take in some music at the BB King’s Blues Club.

Many of the restaurants of Pointe Orlando have made it on our list of top romantic restaurants on I-Drive that you can read about here.