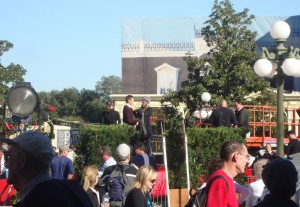 In previous years, Disney had filmed the Disney Parks Christmas parade taping on the first Thursday and Friday in the month of December. In 2014, the dates for the Christmas Day Parade will take place on Monday, December 8th, 2014 and Tuesday, December 9th, 2014 according to the reliable WDWMagic website. Weather may impact performances around the resort. For instance, in 2009 the weather forced Celine Dion to move her performance from in front of Cinderella Castle to the atrium of the Grand Floridian Resort and Spa (See the video below from her 2009 performance). Mariah Carey was the headliner for the 2010 event performing in front of the castle.

As an annual pass-holder, we attended the Magic Kingdom during the parade taping in 2010 and spent a majority of our time sitting in front of Cinderella Castle interacting with the Disney characters as they were waiting on-deck for their segment to be taped. The parade taping’s overtake all of Main Street USA for all of the morning and afternoon, but you get to see a lot of classic Disney characters and cheerleading squads participating in the event around the hub in which you can spend 15 – 30 minutes interacting with.