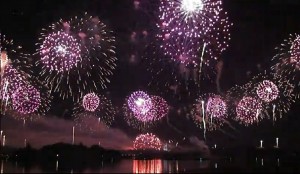 New Years Eve at the Magic Kingdom in 2014 is highlighted by the Holiday Wishes Nighttime Fireworks Show at 7:30 PM, the Main Street Electrical Parade at 6:30 PM and the Fantasy in the Sky Fireworks Show at 11:50 PM with Tinker Bell flying overhead from Cinderella Castle. Just prior to midnight, Mickey Mouse and Minnie Mouse can be heard getting the crowd ready to countdown to the new year which leads to another grand finale of fireworks choreographed to the traditional new years anthem Auld Lang Syne.

New Years Eve Fireworks from Behind the Magic Kingdom