2015 and 2016 Broadway Shows in Orlando at the Dr. Phillips Center for the Performing Arts 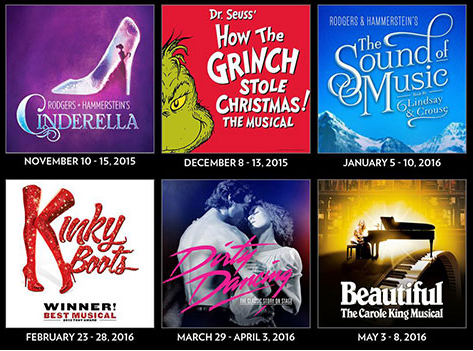 The 2015/2016 season will see Rodger Hammerstein’s Cinderella, Dr Seuss How The Grinch Stole Christmas!, The Sound of Music, Kinky Boots, Dirty Dancing, and Beautiful make a stop in the city beautiful.

Click here for the official website for the Dr. Phillips Center for the Performing Arts for all of the shows and great concerts coming to the center in 2015 and 2016.

There are several parking garages all within close walking distance to the arts center and the free LYMMO shuttle service that has a stop at the center.