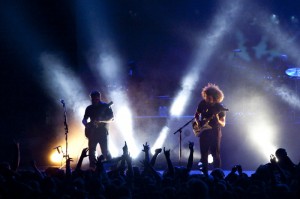 Earthday Birthday is Orlando’s biggest rock and roll and heavy metal outdoor event that is held each year around the Earth Day Holiday. Eighteen headlining rock bands are scheduled for the all day music event in 2015 including Five Finger Death Punch, Rise Against, Bush, Slash, Sevendust, Buckcherry, and more.

Click here to visit the official site for the event to see all of the bands.

Tickets are on sale now starting at $59.

Outside of the Earthday Birthday concerts, click here to visit the main Earth Day event that is held at Lake Eola in Downtown Orlando each year.