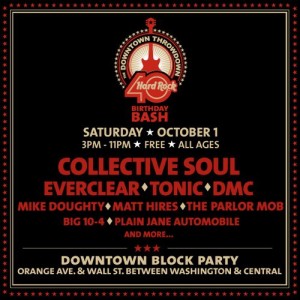 Orlando-based Hard Rock will be holding the event to help celebrate it’s birthday in the place that they have called home for a long time. The block party will be held on Orange Avenue and Wall Street between Washington Street and Central. Other artists scheduled to perform include Mike Doughty, Matt Hires, The Parlor Mob, Plain Jane Automobile, and Big 10-4.

On display at the event and leading up to the event at UCF and Full Sail, Hard Rock will be showcasing their 40th Anniversary Memorabilia Tour Bus that features the top 40 most iconic pieces of music memorabilia from its vast collection including unique clothes, hand-written lyrics, historic instruments, and rare personal items from such artists as Jimi Hendrix, Michael Jackson, Elvis Presley, and John Lennon. Included on the bus is Michael Jackson’s “Beat It” jacket and Madonna’s MTV Awards “Like a Virgin” dress.

On the following Saturday, October 8th, 2011, the B-52’s will be performing a free concert outside of the Amway Center in Downtown Orlando for the Downtown Concert Series.

Everclear at the Hard Rock Hotel in 2010