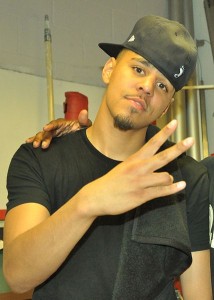 J. Cole will be in concert in Orlando on Friday, March 16th, 2012 as part of the Mardi Gras concert series at Universal Studios. J. Cole is scheduled to take the stage at 8:30 pm.

J. Cole is an American rapper on Jay-Z’s Roc Nation label who is best known for his hit single “Work Out” that samples Paula Abdul’s single “Straight Up”. Other songs include “Who Dat” and “Can’t Get Enough”.