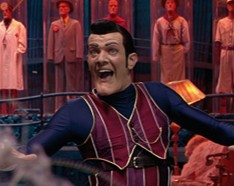 Lazy Town is a world renowned family show geared toward preschool-age children that was originally produced in Iceland with most of the cast being from Iceland as well. The show has gained a huge amount of fans over the last several years. If you have young children who would like to see them in person, Lazy Town will be performing at Sea World Orlando on January 14th, 2012 as part of Sea World’s Just for Kids Family Festival.

After Lazy Town became successful as a show, the cast created their own tour called LazyTown Live! where they sing, dance, and perform for children. This wonderful 55 minute family show centers not only on music and dancing, but also on circus acts that will entertain your children. At the show, expect for your kids to see unique live performances from Spartacus, Stephanie, Robbie Rotten, and the rest of the gang.