2016 Celebrating Martin Luther King, Jr in the month of January in Orlando with Parades and Festivals

Martin Luther King, Jr had a dream of an integrated and unified America in 1963 where over 200,000 civil rights supporters watched and listened to King’s 17-minute public speech in Washington D.C. on the steps of the Lincoln Memorial.

At one point of the speech, King states, “I have a dream, that my four little children will one day live in a nation where they will not be judged by the color of their skin but by the content of their character. I have a dream today!” While crediting the Emancipation Proclamation that ended slavery by Abraham Lincoln many years ago, King eloquently shined the light that the African-American Community had still not been given the right to live the American Dream and therefore was not free. In what is heard through on soundbites as we celebrate Dr. Martin Luther King, Jr each year is the ringing “free at last, free at last” in the dream that King envisioned.

This is our guide to celebrating Martin Luther King, Jr in Orlando in the month of January.

There are many events to participate in the month of January that you can read about here from Friday, January 8th, 2016 through Saturday, January 23rd, 2016. The biggest event is the annual Martin Luther King, Jr Parade in Downtown Orlando on Saturday, January 16th, 2016 at 10 AM.

In addition to the parade in Downtown Orlando, there will also be a parade and celebration in the historical town of Eatonville on the same day at 2 pm with a festival to follow afterwards (see flyer from the 2015 event below): 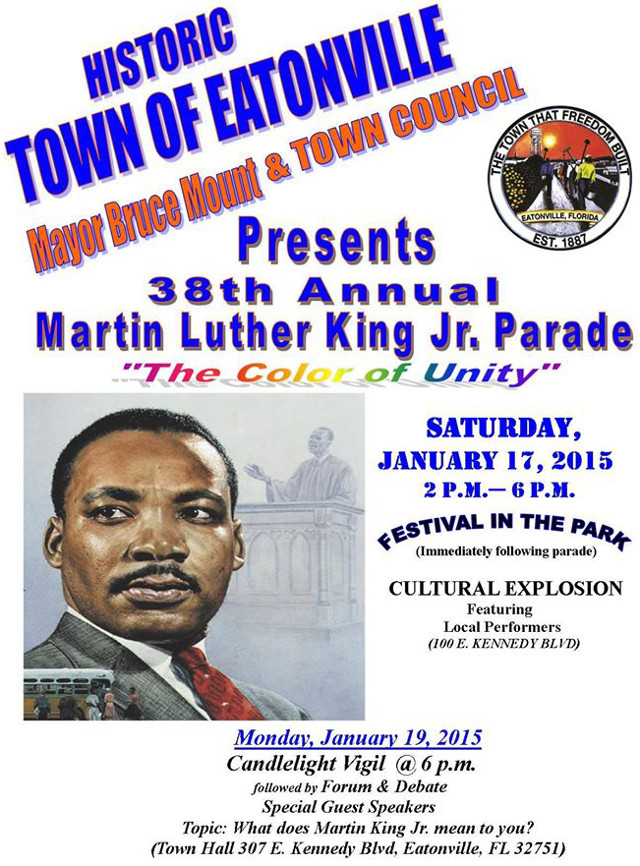 On Monday, January 18th, 2016, the city of Ocoee in west Orland will have their Martin Luther King, Jr Day Parade at 10 AM.

Click here to see all of the events going on in Orlando to celebrate the life of Martin Luther King, Jr.