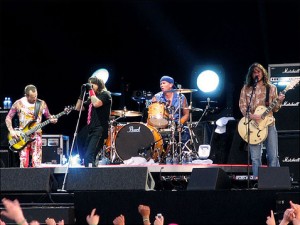 Orlando is about to rock with the Red Hot Chili Peppers at the Amway Center on Saturday, March 31st, 2012 after needing to cancel their original scheduled concert date of January 21st, 2012. Get your tickets to see these rock legends in downtown Orlando at 8 PM.

The Red Hot Chili Peppers are a little bit punk, a little alternative and a whole lot of funk. The band started in 1983 in LA and they’ve played sold out shows all over the world. The band has undergone many changes in members but currently Anthony Kiedis provides the vocals, Flea dominates the bass, Chad Smith drums and Josh Klinghoffer burns up the stage on guitar.

Some of their top selling albums are Blood Sugar Sex Magik and Californication (which included the smash hit song of the same name). They are best known for their amazing songs “Give it Away“, the ballad “Under the Bridge“, and the Stevie Wonder cover “Higher Ground“.

Don’t miss the opportunity to catch the Red Hot Chili Peppers playing all their hits. This is one band that plays amazing music as well as putting on a great show!

Red Hot Chili Peppers at the Amway Arena in 2007